The Rs 9,000 crore Dwarka Expressway Project is an access controlled expressway with a route alignment connecting Mahipalpur (Shiv Murti) in Delhi with Kherki Dhaula via New Gurgaon (Gurugram) in Haryana. It will feature 20+ flyovers and bridges, 2 rail over-bridges and underpasses, 11 vehicle underpasses, 20 underground pedestrian crossings, and a 2.5m wide cycle and bike path.

The project is likely to be completed by 2022 end. The Delhi Metro Rail Corporation (DMRC) has also planned a metro line along Dwarka Expressway. A new 5-km tunnel has also been planned to Terminal-3 at Delhi’s Indira Gandhi International (IGI) Airport. 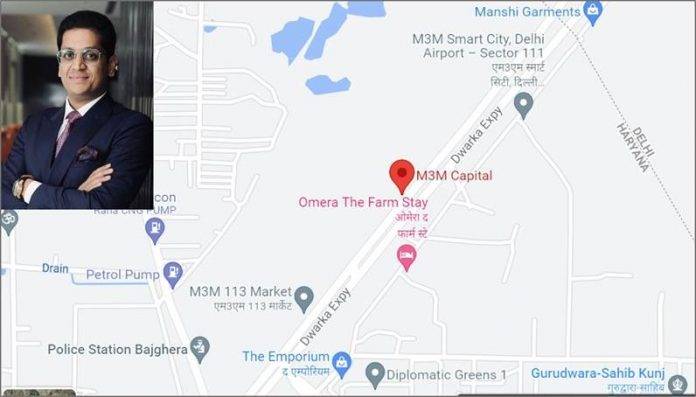 Pankaj Bansal, Director M3M India, believes that Dwarka Expressway will be a game-changer in the realty sector and will encourage more than 61,400 startups and 83 unicorns to invest in commercial and residential properties in NCR-Gurugram and NPR.

As per Orios Ventures Partners report, the Indian startups have raised $42 billion in 2021, up from $11.5 billion in the previous year. The Indian government has also recognized 14,000 new startups in 2021. As of January 2022, India has 83 unicorns with a total valuation of $277 billion.

“India has become the third largest startup ecosystem in the world after the US and China. India has added 33 Unicorns in a single year. India’s 61,400 startups and 83 unicorns are all set to give a booster dose to the Indian commercial real-estate market in the coming years. Startups have leased about 2.2 million square feet office space in 2021 in the top three metros of India-Delhi-NCR, Mumbai and Bengaluru-marking a 56 per cent rise from 2020 in tandem with a spate of $1 billion-plus valuations. Many reports now suggest that India may add another 50 fresh unicorns soon. These startups and unicorns would need office and residential space with most-modern amenities & facilities with good connectivity, and NCR-Gurugram and NPR is expected to be their first choice,” says Pankaj Bansal, Director – M3M India, one of the fastest growing real-estate company in India.

Pankaj Bansal adds, “Gurugram also has the third highest per-capita income in India and has contributed significantly to the Indian entrepreneurial ecosystem. Not just startups and unicorns, even the NRIs are aggressively driving the realty market in India. Keeping the requirements in mind M3M India has recently launched M3M Capital in sector-113, Gurugram, a complete luxury golf residential project, which is on Dwarka Expressway with a top-line of Rs 4,000 crore.

“At present we have launched about 650 apartments of 2.5 and 3.5 accommodation, and the project has exclusive golf-courses, private foyer, green landscape, separate yoga and meditation area, and a 60,000 square feet clubhouse. The project has close proximity to Aerocity and Delhi International Airport, and is part of larger vision for Smart City Delhi Airport. The response has been immense and in the first three days of its launch the project clocked Rs.800 crore booking.”

As per the industry report, NRI investments in India totalled more than $14 billion in FY21. The weakening of the Indian rupee, all-time low-interest rates and an increased inclination in owning a property back home has motivated NRIs to invest in real estate markets in India. Situated close to the Indira Gandhi International (IGI) Airport, Gurugram has again been a preferred investment destination in the North. The outlook for 2022 for NRI investments also considers the region’s commercial activity.

Gurugram boasts of rapidly increasing office space and industrial developments along the Sohna-Manesar belt. Last year, US-based Syneos Health leased a massive office space spread over 2.1 lakh square feet. Microsoft and Morepen Laboratories also leased 1.8 lakh square feet and 40,000 square feet in Gurugram, respectively. The fast-spreading co-working culture and quality infrastructure, has helped increase the housing demand in Gurgaon, particularly from NRI investors. PVR cinemas are setting up an 8-screen multiplex in M3M India’s 65th Avenue, which is one of the most prominent luxurious retail projects in the region.

The declaration of 16th January, as the National Startup Day by the Prime Minister Narendra Modi has given new enthusiasm to startups. Recently, Union Minister of State for Electronics and Information Technology, Skill Development and Entrepreneurship Rajeev Chandrasekhar also said that during the next 25 years, the Indian economy’s growth and expansion, as well as the creation of employment and investments, will largely be driven by the country’s startup and entrepreneurial ecosystem. NCR-Gurugram and NPR is going to be a major attraction for investors and post commencement of Dwarka Expressway, the demand for residential and commercial space is expected to increase exorbitantly.