The Delhi-Mumbai expressway, covering Delhi, Haryana, Rajasthan, Madhya Pradesh, Gujarat, and Maharashtra, is being developed at a cost of about Rs 1 lakh crore. Once completed, the 1,386 km expressway will be the longest in India.

The work on the 1,386-km Delhi-Mumbai Expressway is underway at a high pace, with nearly 100% physical progress on 500 km of stretch across four states – Haryana, Rajasthan, Madhya Pradesh and Gujarat – and the Sohna-Dausa section almost ready, National Highways Authority of India (NHAI) data analysed by News18 shows.

Further, in Rajasthan, 98% work is also completed on the 33 km stretch between Lalsot and Sawai Madhopur. In Madhya Pradesh, over 95% work is done on an additional 73 km stretch around Ratlam.

In Gujarat, the first four packages on the Vadodara-Mumbai stretch are almost complete – the work on the first 24 km is done, while it is more than 96% done on the next 79 km.

Speaking to News18, an official said that the government is committed towards its promise of delivering it on time.

“In almost all packages, the construction is going on as per the plan. The ministry is trying its best to deliver the project on time. Barring one small package of 18 km, for which bids will be invited soon, work has been awarded for the entire stretch,” the official said, demanding anonymity.

Starting from Haryana, the e-way has at least 139 km of length in the state, which is divided into six packages. The stretch starting from Sohna to the state border is divided into three packages and the work is over 90% complete. The work on the first 18 km is about 99% complete, while on the next 29 km, it is 94% done. In the last 32 km, the work is 98% completed. The deadline for these three packages is January 30, 2023.

From Haryana, the e-way enters Rajasthan where it is 373-km-long. Of the total length, work is nearly done on the 168 km. The three packages of the 104 km of Sohna-Dausa section falling in Rajasthan are 100% complete, the data shows.

The next three packages – 110 km long – from Dausa to Sawai Madhopur are also almost complete. In this section, the work on the first 31 km is complete, while the physical progress for the next 33 km is 98%. The work on the last 46 km is 84% done. From Sawai Madhopur to the state’s border with MP, only marginal progress has been achieved, the data showed.

The longest stretch of this expressway is in Gujarat – 426 km. The highest share of work in the state is done on the Vadodara-Surat section. There are five packages between these cities and work on one of these is 100% completed, while on the other three, having a deadline in February 2023, it is over 95% complete. In terms of length, work on nearly 100 km is completed – 100% complete on 24 km; while 76 km with over 95% work done. In the last 25 km, which has a deadline in 2024, work is only 24% done.

The Delhi-Mumbai expressway, covering Delhi, Haryana, Rajasthan, Madhya Pradesh, Gujarat and Maharashtra, is being developed at a cost of about Rs 1 lakh crore. Once completed, the 1,386 km expressway will be the longest in India. It is expected to halve the commute time between Delhi and Mumbai, from nearly 24 hours to 12 hours, and shorten the distance by 130 km. 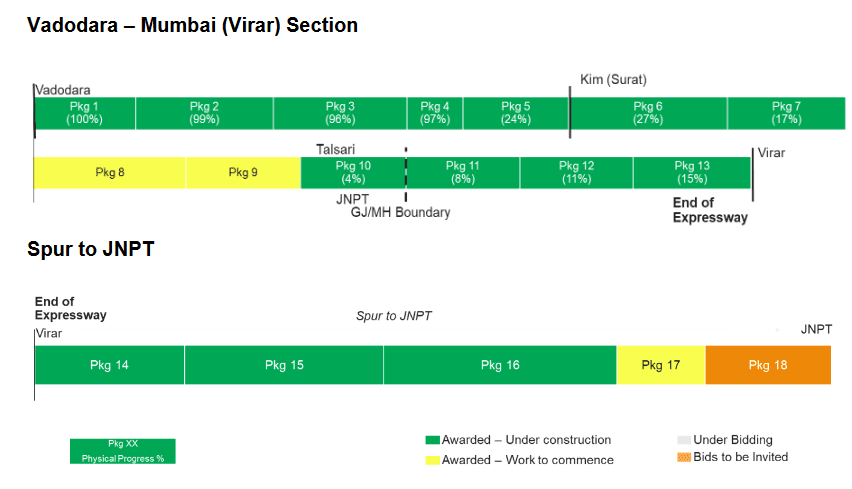 This e-way will generate annual fuel savings of more than 320 million litres and reduce CO2 emissions by 850 million kg, which is equivalent to the planting of 40 million trees. Over two million trees and shrubs are planned to be planted along the highway as part of NHAI’s commitment towards environment conservation.