Not Just Golf Course Road Extension, Whole of SPR to be Revamped 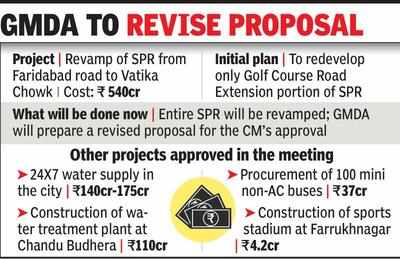 The whole of Southern Peripheral Road (SPR), right from Faridabad Road to NH-48, will be revamped in the coming months, GMDA officials who attended a meeting with chief minister Manohar Lal Khattar said on Friday. Earlier, there was a plan to upgrade only the Golf Course Road (Extension) stretch of the SPR.

At the GMDA meeting, the officials tabled a proposal to upgrade the stretch between Faridabad Road and Vatika Chowk with the construction of flyovers at five critical intersections at a cost of Rs 540 crore.

Earlier, officials were exploring the options of both flyovers and underpasses at the junctions. They settled for flyovers as underpasses would lead to waterlogging during the monsoon and make it difficult for heavy vehicles to navigate the stretch.

“We proposed upgrading the stretch through the construction of flyovers at five intersections since the technical viability of these was found to be more. Although the GMDA chairman (chief minister Khattar) approved the proposal, he told us that the scope of the project should be expanded to include the whole of SPR, meaning the entire stretch between Faridabad Road and NH-48. Now, we will revise the proposal and the estimate and present it before the chairman again,” said a senior GMDA official.

A proposal to procure 100 minibuses for the Gurugaman service was also approved at the meeting. Chief executive officer Sudhir Rajpal said 32 possible routes had been identified in the city. He informed Khattar that the revenue generated from the bus service had improved substantially from Rs 11-12 per kilometre to Rs 41 per kilometre. The cost of running the service is currently Rs 70 per kilometre.

Among other issues that were discussed at the meeting was a plan to provide 24X7 water supply across the city and a proposed sports stadium on 12 acres in Farrukhnagar, which was approved. Metro connectivity was also among the issues discussed. Additionally, a project to create new sports facilities at Tau Devi Lal Stadium, such as a shooting range, badminton court and swimming pool, as well as the upgrade of the existing cricket stadium, was also approved.

At the meeting, officials said a proposal for a 28km-long Metro network had been prepared and sent to the Centre. The Union government, the officials said, has given in-principle approval to the project.

The officials also revealed during the meeting that a proposal to build a Metro spur from Rezang La Chowk to Dwarka had also been sent to the government for approval.

Khattar said he and Union minister Rao Inderjit Singh would be working towards making the proposal a reality.
A project to construct a road between Nelson Mandela Marg in Delhi and MG road, which has attracted objections from residents and environmentalists as a portion of it will pass through the Aravali biodiversity park, was also discussed.

“The chairman has directed NHAI to explore the feasibility of constructing the portion of the road passing through the park as a flyover. This will prevent any harm to the flora and fauna there,” an official said.