A station has been proposed in Manesar on the Delhi-Ahmedabad Bullet train corridor that the National High Speed Rail Corporation Limited (NHSRCL) plans to build. The corridor, whose detailed project report has been drawn up, is still in the planning stages and is likely to take shape only in the latter half of the decade. 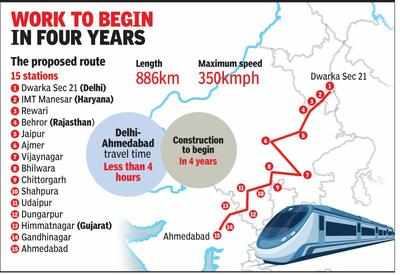 Travel time on this 886 km route is expected to be under four hours, with a total of 15 stops under consideration. Rewari is the only other station proposed in Haryana. The proposed route originates at Dwarka Sector 21 in Delhi and crosses into Gurgaon at Chauma. It then runs along the Dwarka Expressway till Ramprastha City (Sector 37D) before turning right to align with the Delhi-Jaipur railway line and crossing the KMP Expressway before joining the Delhi-Jaipur highway at Shahjahanpur toll plaza (Haryana-Rajasthan border).

NHSRCL officials held consultations in the city on Friday for land for the corridor.

An NHSRCL official told TOI, “We have chosen this alignment (along the rail line and highway) to ensure that land acquisition is minimal. In such mega projects, maximum time gets spent in acquiring privately owned land. While the alignment is final, acquiring land is yet to begin. Friday’s consultations with private landowners in Gurgaon and Rewari were fruitful and they all agreed to let their land be acquired for construction of the Bullet train, probably sensing the benefits this project would offer once it is ready.”

The official added, “We would need around three to four years to acquire the land, shift utilities, get necessary clearances and NOCs for various departments, permission to cut trees and several other such things before we can start construction work on ground. Once that work gets started, we would need about three years to complete the project.”

Other than Dwarka and the two Haryana stops, of the 15 stations proposed on the corridor, nine are in Rajasthan and three in Gujarat. Officials said the corridor will be a fully elevated one. At present, it takes about 14 hours by train from Delhi to Ahmedabad. On the Bullet train, it is expected to be under four hours.

Groundwork for another high-speed rail corridor — Delhi-Gurgaon-Alwar RRTS (Regional Rapid Transit System) is already under way in the region. “Both the Delhi and Haryana governments have approved this project and a final nod is awaited from the Centre. The preliminary work like soil testing, road widening has started and we are awaiting approval from the ministry of housing and urban affairs,” said an official.